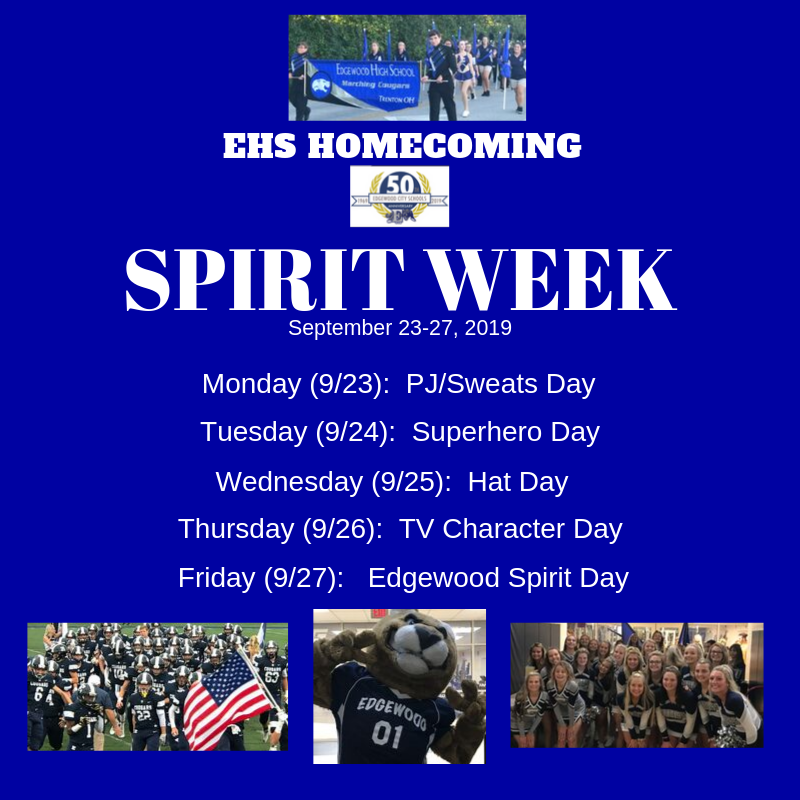 In  preparation for Edgewood’s 50th Homecoming event, EHS is hosting our annual Spirit Week. Each day from Monday, September 23-Friday, September 27, students and staff are encouraged to participate in the daily theme. They are:

The Homecoming Parade takes place on Thursday, September 26.  The theme of this year’s parade is “50 Years of Television”. Parade participants will gather at 5:00 p.m. at the Trenton Community Park, located at 440 Dell Drive, in Trenton. Parade participants must enter the park from North First Street. The park’s front gate, located on Dell Drive, will be closed.  The parade will begin at 6:00 p.m. Once the parade leaves the park, it will follow Dell Drive to Sal Boulevard, turning west onto State Street. The eastbound lane of State Street will be closed as the parade reaches State Street. Local law enforcement will continue to close roads as the parade moves through the route. The parade will end at Kumler Field, adjacent to Busenbark Road.

Starting at 7:00 p.m., Edgewood students and staff will gather on Kumler Field for Rally at the Turf. Food, Flubs, DJ music, and fireworks are planned for the event.  Fireworks will take place around 8:30 p.m.

On Friday, September 27, pre-game festivities will begin at 6:15 p.m. at Kumler Field with the presentation of class floats followed by the crowning of the Homecoming King and Queen. Following the pre-game activities, the Varsity football team will kickoff at 7:00 p.m. against the Harrison Wildcats.

Edgewood’s Homecoming events will end on Saturday, September 28 at Edgewood High School with the Homecoming Dance.  Students can purchase tickets in the high school cafeteria from September 23-27 during lunch period, and again on Saturday, September 28 from  9:00 a.m. to Noon at the Edgewood High School Gymnasium. Tickets are $20 per person. Tickets will not be sold at the door. Middle school students are not permitted to attend.