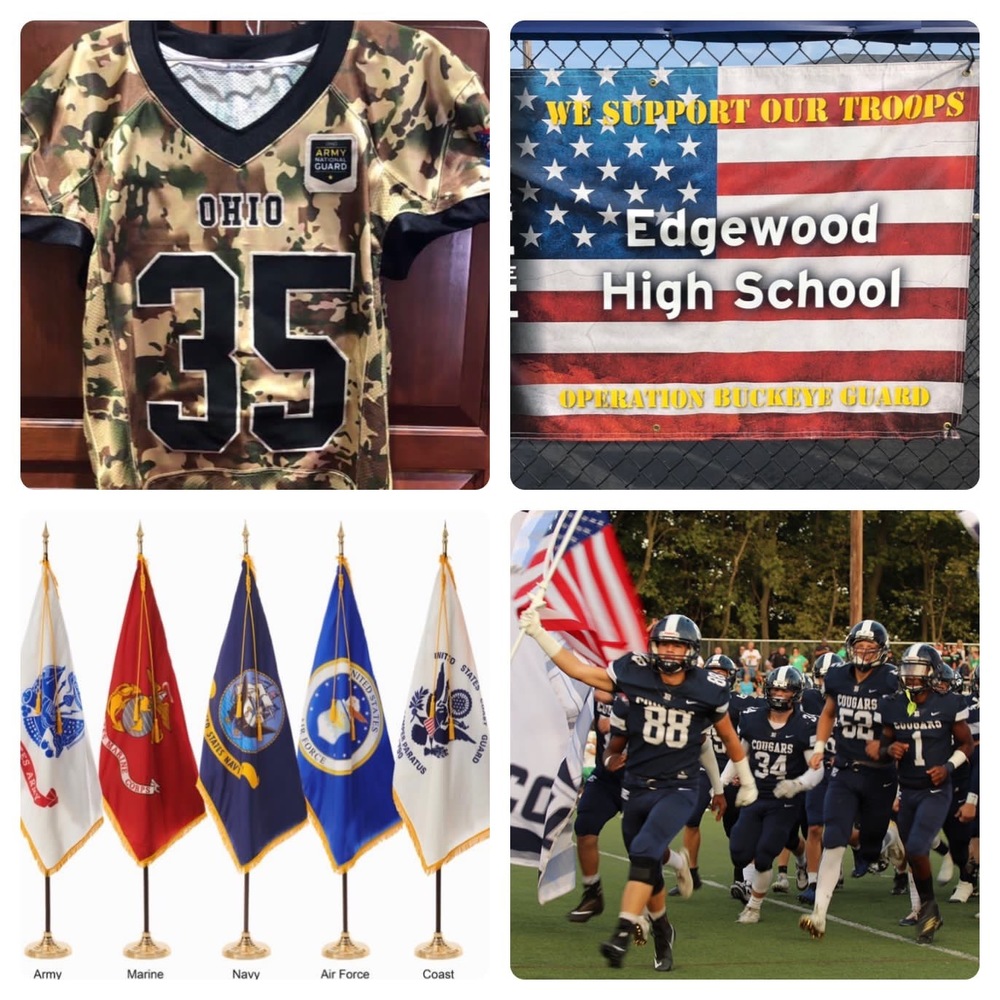 The Edgewood High School Varsity Football team will be trading out their navy game jerseys to wear camouflage on Friday, October 4 as a show of support to the men and women serving in our armed forces.  The Ohio Army National Guard is loaning the jerseys to the Cougars, with 2019 being the inaugural year for the “National Guard Game of the Week” program. The Edgewood High School Football program has a rich history of alumni, along with community members, serving in the military. “As a program, we want to show our appreciation to these brave men and women with a Military Appreciation Night. All active military and retired military personnel, who present their military I.D. at the gate on Friday, October 4, will receive free admission to the football game, said Mr. Scott Clemmons, Edgewood’s Head Varsity Football Coach. “This is just a small way Edgewood can show our appreciation for the service and dedication these brave men and women give to our great nation,'' stated Clemmons. Edgewood plays Ross Local Schools, at Kumler Field. Kickoff is at 7 pm.

The football jerseys, being worn by the Cougars, are an extension of the “Operation Buckeye Guard” (OBG) program, which was initiated by the Ohio High School Football Coaches Association (OHSFCA). High school teams have partnered with the Ohio Army National Guard to support Military Appreciation Games through OBG since 2011.

“We’re proud of our long-time partnership with the Ohio Army National Guard, and we’re excited about suiting up in camouflage this year,” said Mr. Jerry Cooke, immediate past president of OHSFCA. “It’s a pleasure and a privilege anytime our coaches get to interact with the Guard, and we want our players and fans to recognize the value of the fine men and women who defend our country at every opportunity. Putting a spotlight on them during one of our Friday night football games is a win-win for everybody.”

“The National Guard has a mission to serve its local communities, so we’re happy to provide this resource to schools interested in recognizing our service members,” said Sgt. Maj. Justin Sprankle, senior enlisted Soldier assigned to the OHARNG Recruiting and Retention Battalion.

The Ohio Army National Guard is comprised of approximately 11,500 Citizen-Soldiers, and offers many benefits such as 100% college tuition, paid job training and affordable healthcare for part-time service.